Sign up for our newsletter to receive periodic updates, announcements and special offers.

Croc Games is ready for GenCon - we've loaded the truck with more goodies than a Basti Camp-Wagon, and we've masked-up like Warhawks and Necropolis Guard! Come find us at the show!

We'll be sharing space with our friends at the Pulp Figures

Click here for the full version of the GenCon map:

We'll be having a convention special on all miniatures, buy 4 packs and get a 5th pack for free! We'll also have the WarGods of Olympus rulebook available in both standard Hardcover and also the 'rich Corinthian Leather' Collector's Edition! And there will be lots of painted display miniatures and terrain to see.

There will also be a WarGods event at 6:00 on Saturday night - "Showdown in the Garden of Discord". Bring your WarGods warband and join in the mayhem, or just stop by and watch the carnage!

If you'll be in Indy, be sure to stop by and say hello!

We’ve held off as long as possible - it has been many years since we’ve had to raise prices. However, the last year has seen the cost of casting metal skyrocket, and we have no alternative to raise the prices of miniatures accordingly. Orders placed before Friday July 15 will be filled at the current prices. Thanks to everyone for your understanding on this. 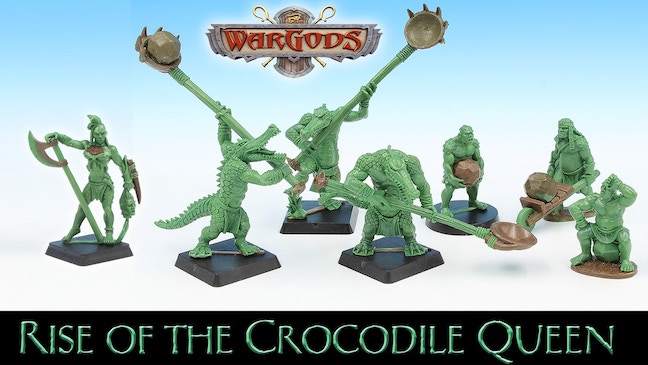 From the ruined temples of the island of Crete comes the beautiful and mysterious Mother of Serpents. She carries into battle her two beloved pets, venomous serpents whose bite can kill a man in seconds. The Mother of Serpents is a dangerous foe, shrugging off wounds that would kill mortal men... it is said she can even regenerate severed limbs! But her assistance comes with risk, for she is the servant of an unknown foreign god -- what price will she demand for her loyalty? Dare you add her to your warband?

We've also posted a 2-page excerpt from WarGods of Olympus, featuring the Mother of Serpent's rules and background. You can read up on her here: 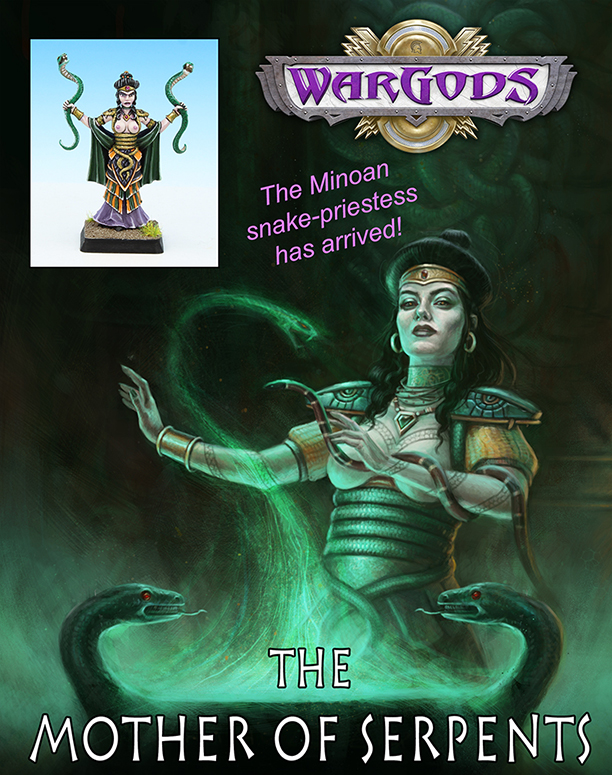 
The Trojans are staging a counterattack! On the morning before the battle, the devout Trojans made a sacrifice on their War Altar to Zeus, and soon the battle commences. Led by man-killing Hector and his brother Paris, the Trojans wade into battle. Swift Trojan chariots driven by powerful heroes in heavy 'dendra' armor thunder across the dusty plain. The Trojan Seer has foreseen that today's fight will end in victory, but not without cost... the Tragic Hero is doomed to lose his life to win the day!

The Trojan Wave 2 is now available! Included in this release are the following miniatures:

We’re painting miniatures for “WarGods of Olympus” during the month of October. Join us and get a Limited Edition "Priestess of Eris” event miniature!

How to participate: If you are not already a member, join the WarGods community Facebook group: https://www.facebook.com/groups/174096773345919

1. On the pinned Olympus October event thread, introduce yourself and post a photograph of what you’ll be painting. It can be a character, unit, or monster, but it must be a Crocodile Games miniature from our WarGods of Olympus range. The photo must be unpainted to start with, but primed is OK. 2. Be sure to use the hashtag #OlympusOctober on your post. 3. You must post at least 1 update during the month, showing your progress. Be supportive of your fellow Olympians! 4. Fully paint your miniatures to the best of your ability, and post a completed photo by midnight on October 31st.

At the end, all participants who complete the challenge will receive a code redeemable in the Croc Store to add a Priestess of Eris miniature to any order over $10. One miniature per participant please. This is not a contest - let’s just have fun painting some minis, and get ready to battle in the coming year!

*The "Priestess of Eris" was planned as the event miniature for the year of 2020. Unfortunately, the COVID-19 pandemic shut down our convention plans, and she was only available at a single event. We’re making her available to everyone online, and her miniature will play an important role in our campaign games planned for 2022. Join the forces of evil and add Eris to your warband - or fight for good and keep the Goddess of Discord safely locked away in your miniature case! 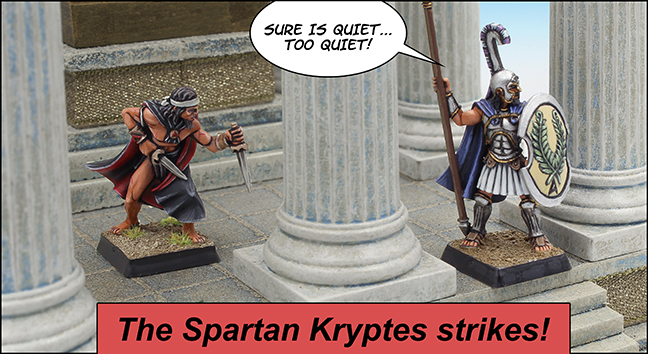 Is your Spartan warband properly equipped to defeat your enemy? To be sure, you have hoplites and peltasts to spare, but is that enough? I'm going to let you in on a little secret - we Spartans do not win our battles by spear and shield alone. A poisoned camp water-supply, enemy messengers never arriving, an opposing commander with a throat cut on the eve of the battle -- these are the works of the mysterious Spartan Kryptes, the Silent Knives!

The Spartan Kryptes is a formidable addition to any Spartan force. Sculpted by Todd Harris, this 28mm assassin is a single piece and cast in lead-free pewter.

To read the rules for the Spartan Kryptes, click on this link to download a PDF of their page from the WarGods of Olympus rulebook: 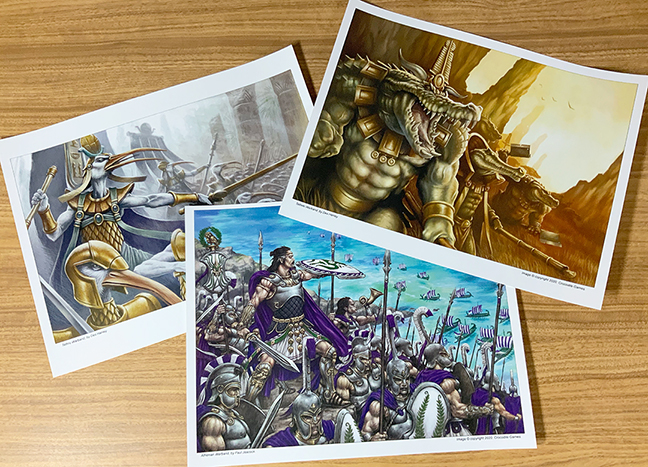 At Croc Games, we love awesome art. ( We're a company founded by an artist after all!). So we've made some of our best art into high-quality prints, featuring paintings by Des Hanley, John Wigley, and Paul Jeacock. The prints are all roughly 8x11", and suitable to hang on your wall or adorn the folder where you keep your army lists!

We'll be including an art print with every Warband deal purchased through the Cro web store. So, if you buy a Sebeki Warband Deal, you'll also get a Sebeki art print, Amazons get an Amazon art print, and so on.


While supplies last - if we run our of a specific art print, we may substitute another, as needed.

Note on overseas shipping: because these prints are 8x11, some shipping options require packing them into a box that is smaller than the print. This may require the print to be folded in order to fit into the box. (However, if your order includes a book, you can be assured it will not be folded, as the book box is large enogh for the full print.).

All USA shipping will be shipped flat and unfolded. 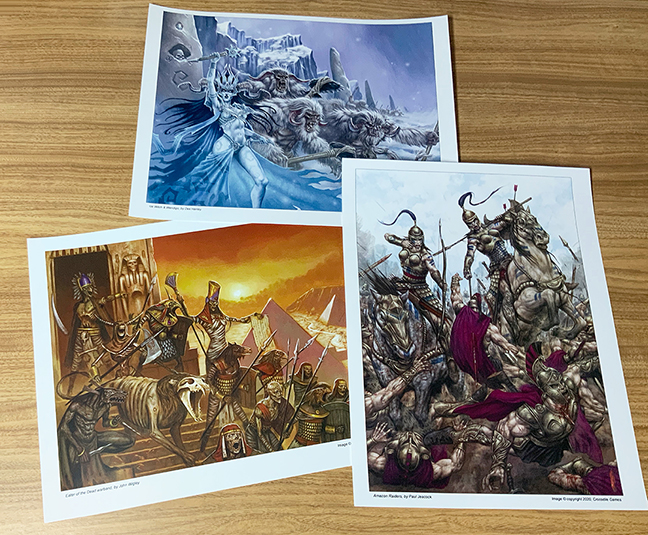 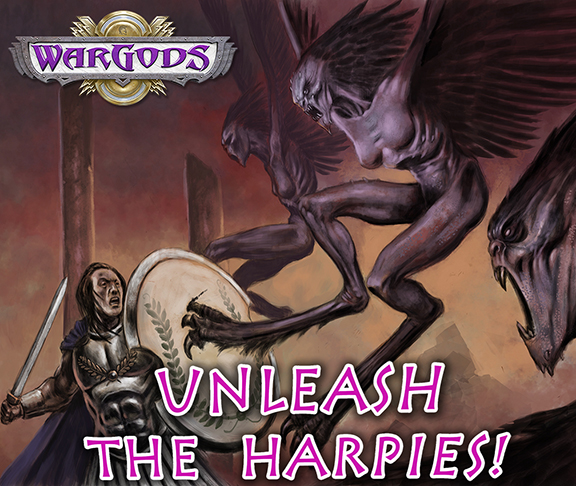 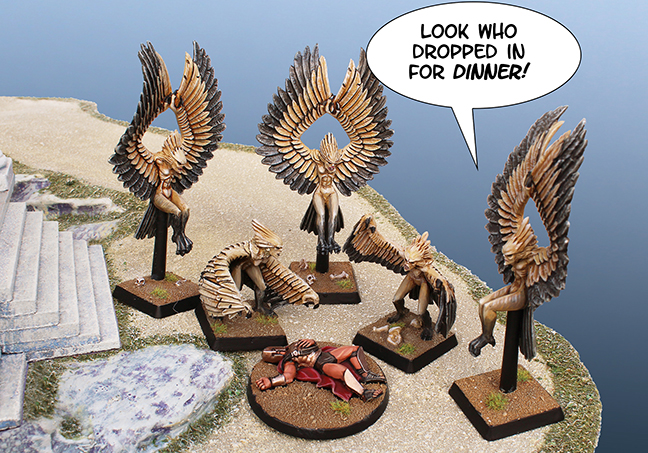 The new range of miniatures for Athens is available now, in the CROC STORE!

The warriors of Athens are citizen soldiers: laborers, tradesmen, and nobles, all equals under Athenian law. Long ago, the Athenians overthrew the tyrants that ruled their city and swore never to submit to another; now they rule themselves by common consensus, something they call democracy. Athens maintains a powerful navy, sailing to distant colonies and remote islands, often coming into conflict with the Spartans, who resent the spread of liberty that their emissaries bring.

The Athens miniatures were sculpted by Chris FitzPatrick, based on concept art by Des Hanley. Athens color painting by Paul Jeacock. The display models were painted and photographed by Felicity FitzPatrick.


Want to know more about Athens in the WarGods world? Check out this excerpt from the WarGods of Olympus rulebook, with rules and background for Athenian warbands: Download PDF.